Actually, a mere seventeen miles from our location, we had two 4.7 earthquakes within a minute of each other.  Unlike any of the smaller rolling quakes we felt in Indiana, this one felt like someone had broadsided the motorhome.  The wind chimes that we had brought inside started ringing, the dogs stopped their roughhousing and I thought, ‘well, there’s our first California earthquake.
The quake was felt in downtown Los Angeles and San Diego.  No damage has been reported.  At first, it was touted as a magnitude 5.2, but later downgraded.

The earthquake resulted in an instant phone call from our daughter Jojo.  She felt it on the other side of the mountains and said that if she did not call instantly, the lines would be jammed.  I could not get on the Internet to check news reports on the earthquake for about two hours.


Out here at Clark Dry Lake dispersed camping area, people left their motorhomes gathering in small groups to discuss the excitement.  Now, things are quiet again.  So far we have not felt the aftershocks.

Saturday, our daughter Jojo brought her camper out and parked nearby.  She is leaving it here until we decide to move to Blair Valley when it gets hot here.  Staying near Borrego Springs at is close enough to her home that she will be able to spend some weekends with us.

Yesterday, we traveled Rock House Road then across the dry lake using the designated road and traveled into the canyon.  Our destination was the rock house, the namesake of the road.  Jojo’s SUV has much better clearance than the Miata, but we really needed a Jeep with four wheel drive to complete the trip.  We uhhh, kinda got stuck in the deep sand as we tried to turn around.  Not to worry, it was easy to dig out and be back on the road. 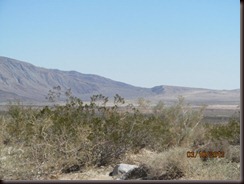 Once we were safely on the road, we started out on foot to explore and to photograph the canyon.  It never ceases to amaze me how a desert and mountains can change within a few yards.  The beauty never stops  making me feel thankful to the Creator. 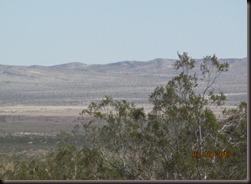 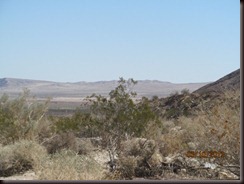 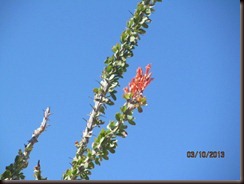 If we get a little rain within the next two or three weeks, the desert is going to explode with color.  The Ocotillo are ready to wave their red flag blossoms. 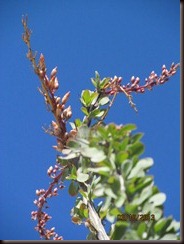 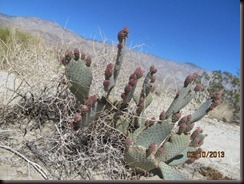 The Beaver Tail Cactus’ buds are ready to explode.  New life is
springing from the desert floor.  Color appears from what looks like dead follege. What looks dead comes alive.  Similar to the message of Easter. 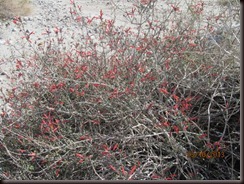 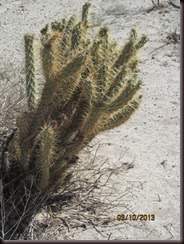 I know these were created for a purpose, but I sure do not know what it is! 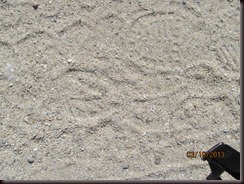 Jojo found what looks to be hoof prints of Big Horn Sheep.  She has a book that I  am purchasing.  Scats and Tracks of the Desert Southwest by James C. Halfpenny, PHD.

When we returned to our site, I found the Big Horn page and yep, she was right.  Can you find the footprint in the sandy road with tire tracks, people tracks? As we drove back to our location, I was on the side of the SUV to photograph the dry lake bed.  It is full of cracks and crevices.  The National Park Service prohibits driving and walking on the bed.  Neither do they do not want dogs to walk on the bed. The major concern is the impact of vehicles on Clark Dry Lake’s delicate playa soil structure and the tiny fairy shrimp that lay dormant within, awaiting the next good rain. 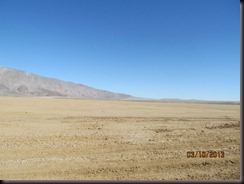 Uncontrolled access to the area could also affect the fragile populations of the Le Conte’s Thrasher and the Flat-Tailed Horned Lizard. By acquiring private parcels of land in the Clark Dry Lake area, Anza Borrego Foundation has helped to reduce some of these harmful impacts by moving traffic onto park-owned land patrolled by rangers can control the impacts. Still, a few people choose to not follow the rules, drive on the lake bed – as you can see in the photos.


We returned to out site for our lunch, some reading and good conversation.  Of course her dog Spanky had to be right in the middle of things. 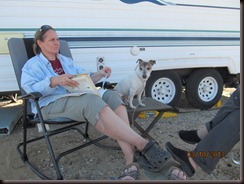 Spank is dog aggressive, meaning that he would like to attack any dog in his sight.  It is quite a job for Jojo and Cathie to be aware of any dog in the area.

We keep Oliver and Olivia safely in the motorhome.  Of course, Olivia bards at Spanky through the windshield and Spanky returns the bark.

Later, they had to return home to start another work week. Once they were safely on the road, we let Oliver and Olivia out to run and do their business.  They normally  stay right with me.  But just as they were taking care of necessities, Coyotes howled in the distance.

Both dogs ran toward the sounds. I called them back.  Oliver returned to me, but Olivia took off in the direction of the sound and my heart skipped a few beats.  Of course I do not have on my hiking shoes, just my Birkenstocks.  Not a good choice for pursuing a crazy Shih Tzu who thinks she is off to see friends.

I called and pursued and called.  Olivia ran zig zag through the desert floor like a crazy, wild dog. I have sand grinding between my feet and the Birks. Ohhh, that feels so good....NOT

I had to resign myself to the fact that I was not going to catch her and she was going to be some Coyote's dinner. I was just sick thinking about it.  I kept calling and on her trail, but that little one can run.

Lucky for me, another camper heard me calling Olivia and set out to help.  He was off to my left and able to get Olivia’s attention and she ran to him with cactus spines in the hair on her chin and leg.  Luckily, they did not penetrate the skin.

I can now add a half mile hike to the time we were out in the canyon on Rock House Road. Needles to say, I slept well until this morning then the earthquake.  What a life!  Never a dull moment around here!

Have a great, safe day and God Bless You.

Thank you for leaving your comment. We do enjoy hearing from you.

Thank you for Shopping Amazon here

“The Son of God became a man to enable men to become sons of God.”